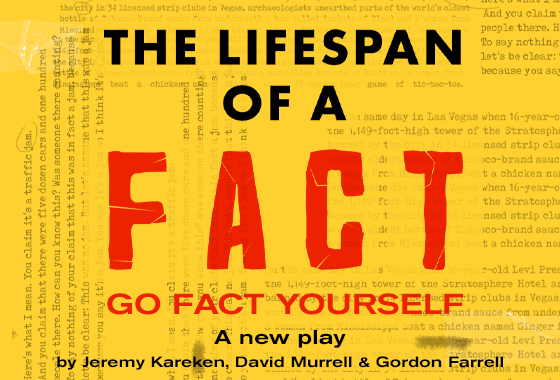 The Lifespan of a Fact

2022 brings the premiere of one of Broadway’s hottest new plays to Farmers Alley Theatre, THE LIFESPAN OF A FACT, written by Jeremy Kareken, David Murrell and Gordon Farrell, and directed by D. Terry Williams.  Jim Fingal is a fresh-out-of-Harvard fact checker for a prominent but sinking New York magazine. John D’Agata is a talented writer with a transcendent essay about the suicide of a teenage boy—an essay that could save the magazine from collapse. When Jim is assigned to fact check D’Agata’s essay, the two come head to head in a comedic yet gripping battle over facts versus truth.  With timely themes about truth and media – this topical comedy runs February 11th thru 20th. 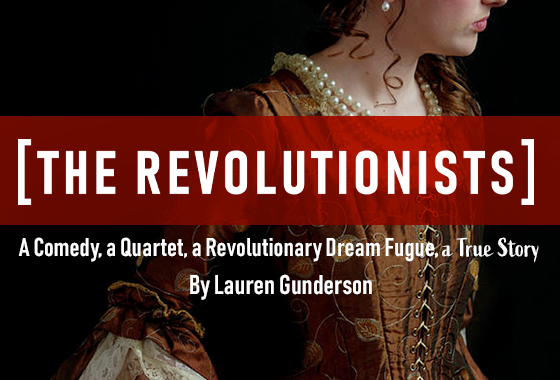 Four beautiful, badass women lose their heads in THE REVOLUTIONISTS by Lauren Gunderson, running March 18th thru April 3rd.   In this irreverent, girl-powered comedy set during the French Revolution’s Reign of Terror. Playwright Olympe de Gouges, assassin Charlotte Corday, former queen (and fan of ribbons) Marie Antoinette, and Haitian rebel Marianne Angelle hang out, murder Marat, and try to beat back the extremist insanity in 1793 Paris. Under the direction of Dee Dee Batteast, this grand and dream-tweaked comedy is about violence and legacy, art and activism, feminism and terrorism, compatriots and chosen sisters, and how we actually go about changing the world. It’s a true story. Or total fiction. Or a play about a play. Or a raucous resurrection…that ends in a song and a scaffold.

INDIVIDUAL TICKETS WILL BE AVAILABLE TO PURCHASE AT A LATER DATE - BUY YOUR SEASON PASS NOW! 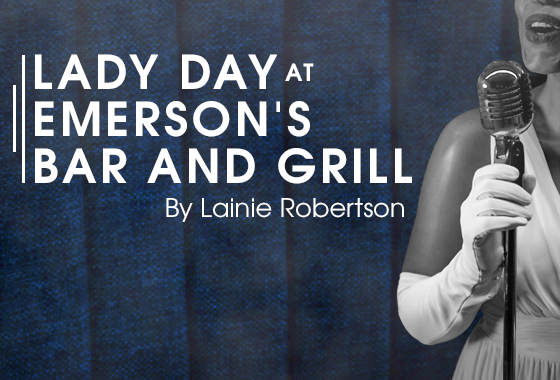 Farmers Alley Theatre is honored to once again partner with the Gilmore Piano Festival for a moving production about the last days of Billie Holiday – LADY DAY AT EMERSON’S BAR & GRILL, running concurrently with the festival April 29th thru May 15th. The time is 1959. The place is a seedy bar in Philadelphia. The audience is about to witness one of Billie Holiday’s last performances, given four months before her death. More than a dozen musical numbers are interlaced with salty, often humorous reminiscences to project a riveting portrait of the lady and her music. Directed by Malkia Stampley, Music Direction by Abdul Hamid Royal and starring Alexis J Roston as Billie Holiday.

Farmers Alley Theatre is proud to bring back to our schedule the sweeping tale of love and redemption set against the rich backdrop of the American South in the 1920s and ‘40s, BRIGHT STAR – running June 16th thru July 3rd.  When literary editor Alice Murphy meets a young soldier just home from World War II, he awakens her longing for the child she once lost. Haunted by their unique connection, Alice sets out on a journey to understand her past—and what she finds has the power to transform both of their lives.  With lively bluegrass and folk score by Steve Martin and Edie Brickell, and to be directed by Kathy Mulay, this uplifting theatrical journey holds you tightly in its grasp and is as refreshingly genuine as it is daringly hopeful.

INDIVIDUAL TICKETS WILL BE AVAILABLE TO PURCHASE AT A LATER DATE - BUY YOUR SEASON PASS NOW!