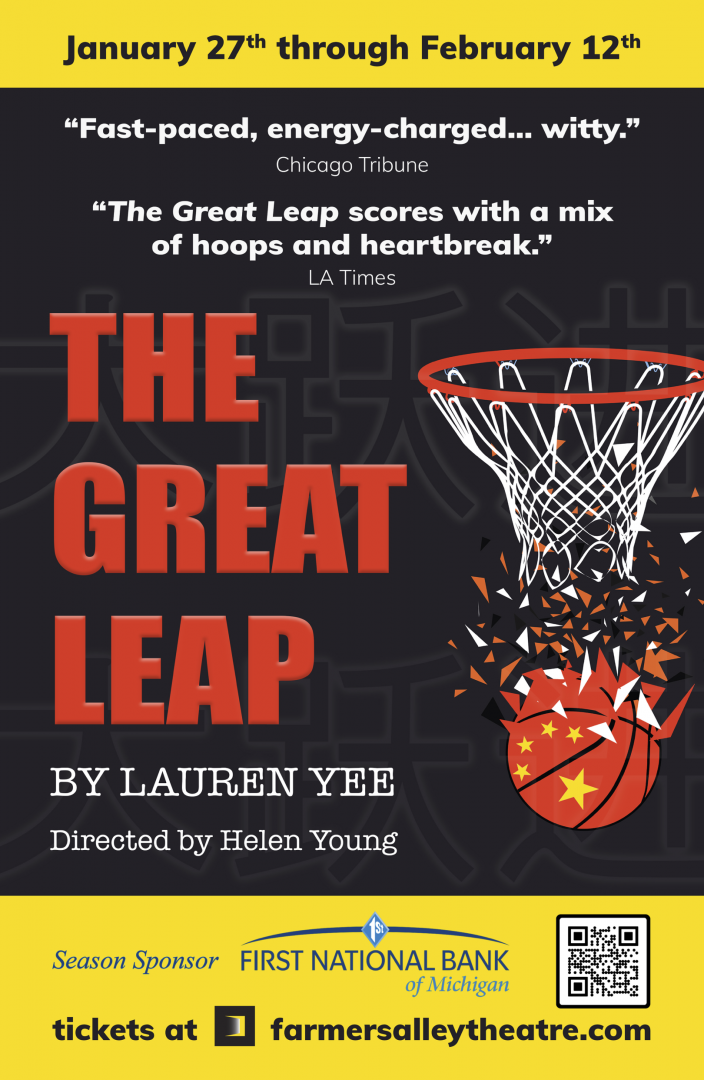 Farmers Alley Theatre kicks off 2023 with the regional premiere of THE GREAT LEAP, a play by Lauren Yee

(Kalamazoo, MI)  Continuing our streak of sold out performances and extended runs (Bright Star, A Gentleman’s Guide To Love and Murder, A Swinging Christmas: The Holiday Music of Tony Bennett), Farmers Alley Theatre is thrilled to bring the very first production of The Great Leap to West Michigan audiences.

The time: 1989. An American college basketball team travels from San Francisco to Beijing for a “friendship game” against a Chinese squad.

Far from friendly, the matchup quickly becomes a high-stakes battle, as the American coach fights for his reputation and his Chinese counterpart fights for his life. Both countries try to tease out the politics behind this newly popular sport.

Cultures clash as the Chinese coach tries to pick up moves from the Americans, and Chinese-American player Manford, spies on his opponents.

Caught in the middle, Manford must prove his mettle on the court while unraveling a long-kept secret. Cultures and generations clash in this kinetic, darkly comic sports drama.

Inspired by events in her own father’s life, playwright Lauren Yee applies a devilishly keen satiric eye to her generation (and its parents).

Helen says, “The theme that intrigues me most in The Great Leap is the relationship between micro-decisions and macro-outcomes — how we now live in a global ecosystem where individual choices actually have global impact because of the myriads of ways people across the world and cultures impact each others daily lives. In the play, the choices that are made by individuals eventually lead to events that then lead to events that then impact global events and how they get framed, which in turn impacts policies and politics.

My hope is that audiences will have a good time, and become intrigued as I am by the phenomena where we can look at any one big issue and use our minds' lens to look back and forth between individual situations and global impacts and be fascinated by how it all connects. There is a lot of hope in this view, as well as a lot of responsibility. And what a privilege, yeah?”

Farmers Alley Theatre’s Executive Director Robert Weiner adds, “We are so thrilled to be continuing our tradition of producing new and exciting works for the Michigan theatre community with The Great Leap.  Following in the footsteps of our previous productions of The Curious Incident of the Dog in the Night-Time and The Revolutionists, Lauren Yee’s vibrant play includes all of my favorite aspects I love to see when attending the theatre - smart comedy, tense drama, relatable storytelling and a unique vision.”

The Play’s author Lauren Yee is a celebrated playwright, screenwriter, and TV writer.  She is the winner of the Doris Duke Artist Award, the Steinberg Playwright Award, the Horton Foote Prize, the Kesselring Prize, the ATCA/Steinberg Award, American Academy of Arts and Letters literature award, and the Francesca Primus Prize. She has been a finalist for the Edward M. Kennedy Prize and the Susan Smith Blackburn Prize. Her plays were the #1 and #2 plays on the 2017 Kilroys List.

Our production stars three professional actors new to Kalamazoo stages: Ming Wu (as the central character and basketball prodigy “Manford”) Richard Manera (as coach “Wen Chang”), and Zhanna Albertini (as Manford’s confidant “Connie”), as well as Jason Grubbe (as the hard-driving American coach “Saul”) previously seen in our production of Superior Donuts in 2012.

The Great Leap runs for three weekends from January 27 through February 12. Tickets are $35/$39 on Fri/Sat/Sun and $30/$35 on Thursdays. Student ticket pricing is $15 for all shows. Preview performance tickets on 1/26 are $25. Tickets are available for purchase at www.farmersalleytheatre.com or by calling the Box Office at (269) 343-2727.

The Great Leap is sponsored by our season sponsor First National Bank of Michigan.